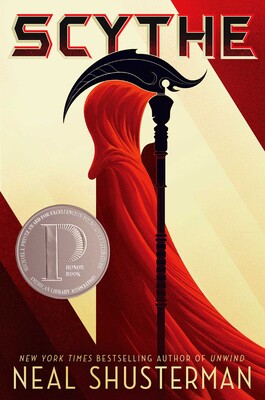 Scythe by Neal Shusterman (FIC SHU) takes place in the future, a future where there is no war, no hunger and no misery. Humanity has conquered everything, even death and has encountered the secret to eternal youth.  We surpassed our greatest fears. We are the top of the food chain. We are gods. Although a new problems has arose. The population. Since no one is dying, the populations grows. Rapidly. To solve this problem, an organization has arisen from the shadows with one simple objective. Thou shalt kill.

Citra and Rowan must apprentice Scythe Faraday, although neither of them is pleased.  In doing so they must study various subjects including, Bokator, an ancient martial exclusive to scythes, Killcraft, and various other subjects that have to do with the art of taking life. Only one of them will be chosen, whoever succeeds will become the next scythe, while the other will just return to their regular life.

Scythe is a spectacular book. A book that will make you question, do we really want eternal life? Neal Shusterman has taken what all men and women have always dreamed and revealed the dark truth behind it. If you like action-packed and mysterious books, Scythe is the book for you.

Spencer Pendleton has recently transferred to a new school called Greenfield Middle, where he will supposedly get a fresh start after starting a fire in his previous school. However, after he encounters a bully and has an asthma attack, students label him as a ‘loser.‘ He always gets himself into trouble and causes chaos within the classroom.  Instead of blending in with the crowd, Spencer stands out and catches the attention of a group of mysterious people around him.

There’s a tribe that exists within the school, full of runaway kids that originally attended Greenfield Middle. They own the school using weapons that were made out of office supplies and they live off of cafeteria food. He sees them through the cracks between the ceiling tiles and encounters them when he least expects it. To his confusion, the school staff and students don’t have any knowledge of their presence and assume that on top of being a troublemaker, Spencer is a liar.

But they are wrong.

Reading Homeroom Headhunters was an interesting experience for me. It reminded me of all those movies where the new kid arrives at school, and they have to rise to power. However, in Spencer’s case, he doesn’t care about rising to power, nor his reputation. I’m able to relate to Spencer and his perspective of the world. He views most things in a humorous way and attempts to crack a joke every now and then. In fact, my most favorite part of the book was a dialogue between him and the assistant principal.

Unlike books I usually read, Homeroom Headhunters is topped off with a great amount of humor and literature references. I would recommend this to anyone that is looking for a funny book full of adventure and full of what if’s. Find out what happens next in Spencer’s journey at the library. You can also meet Clay McLeod Chapman, the author of the book, at Write to Read Day. 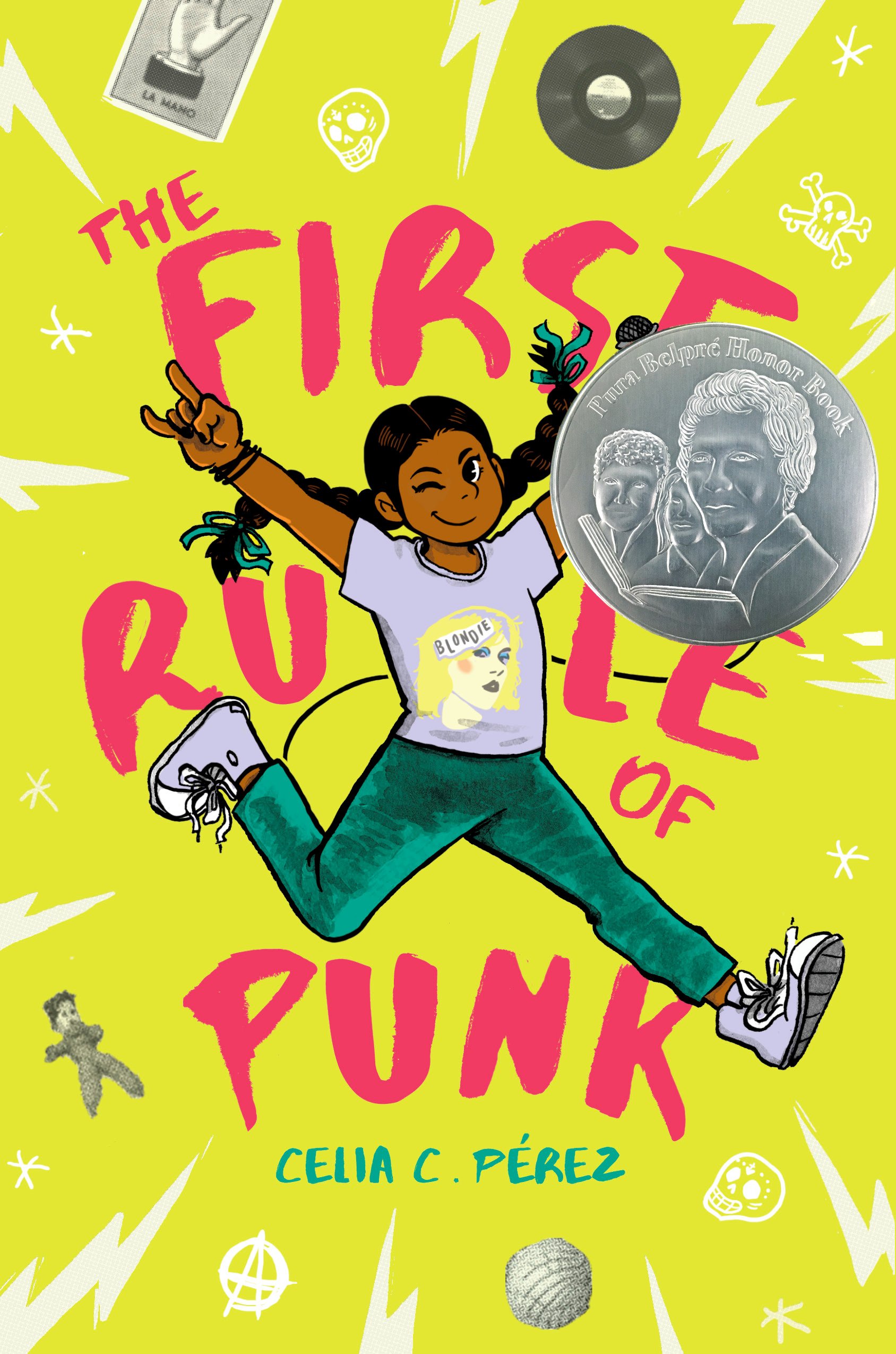 The First Rule of Punk by Celia C. Perez is about a girl named Malú (María Luisa if you want to annoy her) who loves rock music, skateboarding and zines. Her parents are divorced and her mom found a job in Chicago so Malú has to move with her there. When it is Malú’s first day in her new Middle school in Chicago she wants to express herself with her punk clothes, music and makeup, but the “Queen bee” of the school, Selena, always finds a way to get her in trouble.  But that doesn’t make Malú stop doing what she loves. In fact, it motivates her to follow her heart.

Along with that, she has her mother, also referred to as ‘Super 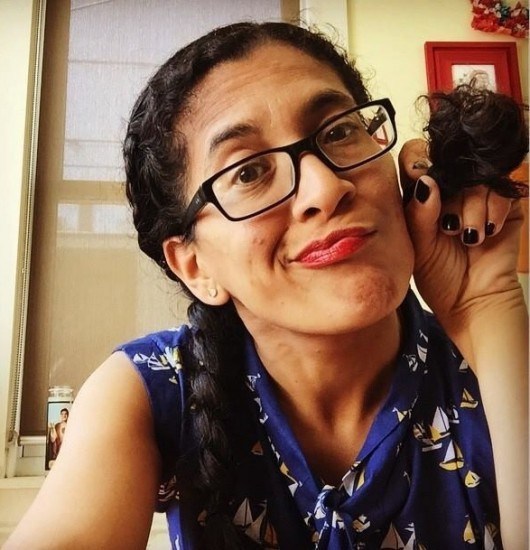 Mexican’ holding her back from being free to express herself.  Her mom always tells her to stop being a punk and be a nice Mexican Señorita like her, but Malú will always stay with her punk like her dad taught her.

One day, she makes friends and together, decide to start a rock band, They create songs with drums and other instruments. The only thing concerning Malú is what if her mom finds out? If you want to find out more about the book, hear the music, or the places in Chicago featured in the story, you can visit celiacperez.com.

Celia will join us on May 25th for Write to Read Day 2018 where students can learn about how to make their own zine! 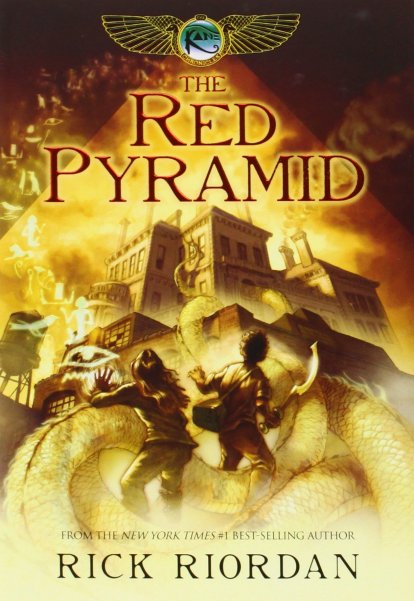 The Kane chronicles is a good series in general, but I’m specifically explaining why I recommend The Red Pyramid. Well first off I just wanna say this book catches your attention at the exact beginning. Just read this!

“We only have a few hours so listen carefully. If you’re hearing this story, you’re already in danger. Sadie and I might be your only chance.”

(It’s supposed to be a recording, just saying.) Now I don’t know about you but that’s really interesting to me. Another thing I liked was how all three books are written from the perspective of Carter or Saide, indicated at the top of the chapter by the title.

I enjoyed how the book has to do with Egyptian gods. One way is having both Sadie and Carter inhabit the two gods Isis and Horus. The second way is how they describe certain gods in the way they actually look according to Egyptian mythology and others in their own way, as humans. Here’s as example with Anubis, Egyptian god of death:

“a good-looking boy of about sixteen dressed in black robes. His complexion was pale, but he had lovely brown eyes… His black hair was long and tousled.”

Interesting for a human. And also he has a form were he turns into a little puppy, so cute! Anyway, another thing I like about this book was how even though it contains A LOT of fantasy, it also might inspire young readers to go deeper into the book and search up somethings about Egyptian mythology! It certainly made me want learn more about Egyptian mythology, especially the gods!!

When Jamie, hears a distant scream, he already knows that Miguel, his best friend and cousin, is dead. In Guatemala, everyone know someone that has been annihilated by the Alphas, a dangerous and powerful gang, and also known responsible for drug trafficking. Anyone, like Miguel, who disobeyed their wishes or refuses to work for them, was killed. Jamie worries and fears that he will be the Alphas’ next victim. Jaime along with his cousin Angela make the decision to make the long journey to the United States where he will stay with his older brother, Tomas.

Join, Jamie and Angela on Alexandra Diaz’ Only Road as they leave for the United States.

Wonder is a children’s novel by R.J Palacio, It was first released in 2012. It focuses on 10 year old August (Auggie)

Pullman who was born with a facial deformity and has been home schooled his entire life- Until his 10th birthday. After a while of debating his parents finally suggest that he should attend a public school in order to receive a better education and some social experience. The first few Months are with no doubt difficult. During this time he makes both friends, enemies and finds himself in the center of a middle school war. While some of his classmates bully and tease him others stand by him. The story changes perspectives and is told by him and his friends/family, including  His sister, Summer- One of the students that befriends him, Jackwill (Another one of his friends), Etc.  Throughout the story he continues to face challenges which don’t all just have to do with him being different. The story Was inspired by placio’s Own experience with a girl who also had a facial deformity. When her three- year old began to cry because he was scared she imminently picked him up and left but not just because of her embarrassment but to protect the little girl. She continued to regret not being able to do something more like begin a conversation with the little and show her kids that there was nothing wrong, Soon auggies character began to  form in her head. After missing the opportunity to show her kids to “choose kind” She Wrote wonder Which continuously mentions what it is to choose kind and why it’s so important. A live film has been confirmed for November 17, 2017, So make sure to pick up Wonder at our library before hand!

Gabriel Finley is a kid who needs to rescue his father in Aviopolis, under a cemetery guarded by birds.  He has to solve challenging riddles and fight to find his father along with a raven named Paladin. He will have to go through different missions to save to his father, Adam. It will uncover the truth about his captor, a demon named Corox- half human, half raven.

This book is great for someone who likes mystery and readers who like not knowing what is going to happened. This book is good for upper elementary and middle school readers.

Doll Bones is a fiction book and it’s also scary. It’s about three characters, Poppy, Alice, and Zach, and most importantly the bone china doll. An unexpected adventure leads them to meeting strange people, going to strange places and surviving for a few days by themselves. There is also romantic vibes between Alice and Zach. They need to complete this quest to bury the doll in her grave because the bone china promises to make their lives miserable until they do. This book has romance,horror, and of course adventure. 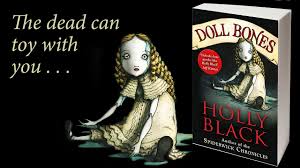